Last night was strange. After dinner, we had a wine and cheese night, although at some point the wine was upgraded to port. Pleasant, but not the strange part. No, the strange part was despite the lateness of the wine and port drinking, the light outside never vanished. We won’t see night again for some months now.

Two days ago was strange. On the horizon we saw our first ice. An iceberg some 10km away from us. Despite it being so far away, it was huge. It is hard to describe or get a good scale of it but it wasn’t a classic Titanic berg. No, it was a chunk of the iceshelf, maybe 50m above the water surface and no doubt hundreds of meters below it. It was easily half a kilometer wide. Again, the camera doesn’t do it justice, but it looked like this: 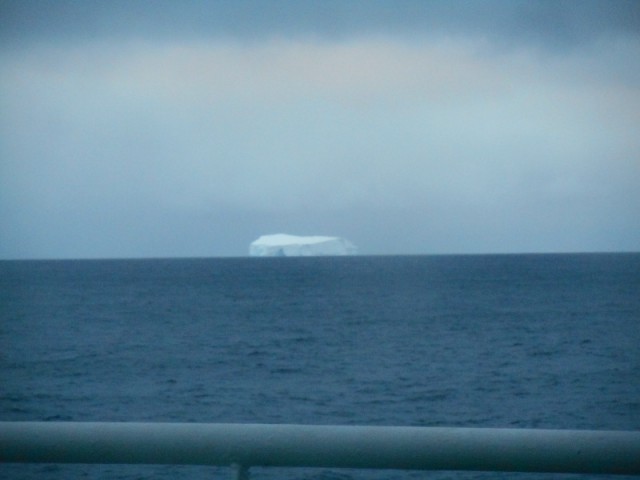 On the radar we could see an even bigger one. Then they just kept appearing all around us, and we soon we seeing a couple at any given point. Silent giants floating by – we’re in their domain now. At night (brief as it was) our searchlights picked them up from a huge distance – they are very bright and reflective, like a sensible cyclist at night. Quite a sight.

Yesterday morning was strange. I woke up at 0600 to a loud crash and a violent shaking of the ship. In my pijamas I jumped out of bed and up to the bridge. Some of of the other passengers had had the same reaction. In front of us lay sea ice as far as we could see – thin white and flat chunks ahead of us for miles and miles, white lilies on a black pond. It is confusing to see such an endless bunch of surfaces that you could walk on and jump between so far from any true land. The crunch – which had continued since I woke – was the sound us us crushing our way through them. Through the way the crunching continued, intermittently as we entered and exited areas with more or less thin ice. The crew seem completely unfazed by the fairly dramatic sounds, reminiscent of distant thunder, and shaking of the ship. After 24 hours and a sleep through it, neither am I. The shaking, in fact, adds a degree of immersion when we’re watching action films. 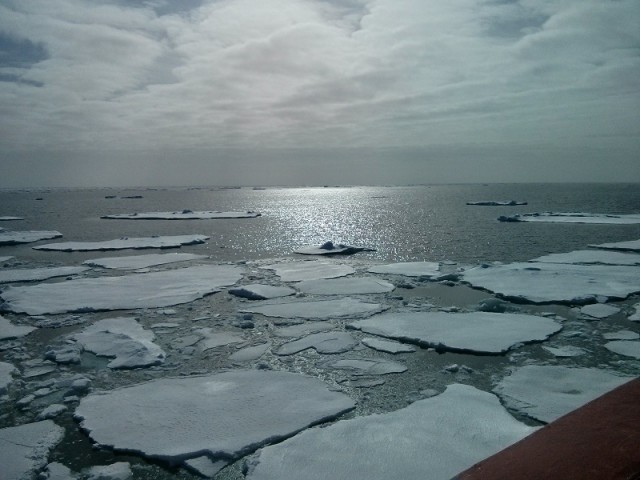 Icebreaking is a fairly brunt force process. We just power forwards and slam into the ice. Sometimes it just cracks and pushes to the side, but a lot of bigger chunks that aren’t easily shoved about end up going under our hull later to pop up in bits alongside the ship over its full length. The amount of energy needed to break up this much ice must be phenomenal. Apparently we use 14000l of fuel a day for usual cruising, but this rises to 22000l when we have ice to smash. The sheet ice we have encountered so far is thin and weak, and usually crumples like paper when we hit it; sometime tonight we will reach a thicker layer that will require more power to crack. Behind us, a trail of destruction:

Yesterday was also strange as we got a wildlife hat-trick (possibly). We saw our first seals – lounging, as seals seem to do perpetually – on the ice sheets until our boat’s presence deigned then to turn their head and (in one case) flee in terror as the ship bore down on their ice chunk. We also saw numerous penguins – chinstraps, I am told – swimming and wadding over the ice. They look quite small from the distance we saw them. It is strange to sea animals walking on ice – making them terrestrial – so far from any land. Lastly, I saw a splash of water and something vanish into the sea. My fellow winterer Hue tells me emphatically that it was a whale, although I am dubious. Still, if it was, we’ve seen all three of the famous Antarctic critters all at once! 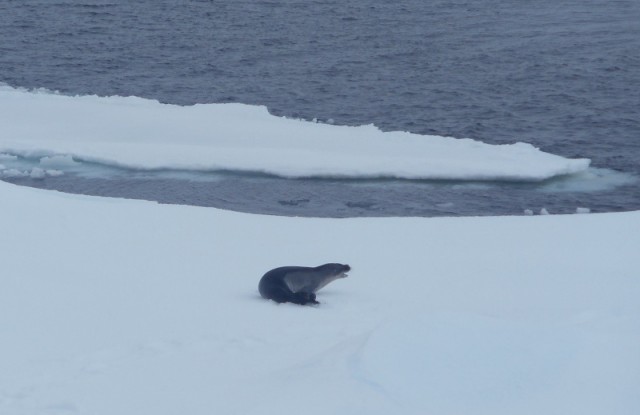 To finish, some statistics from a meteorological observation I just did:

And this one highly professional warning on a GPS receiver connected to our ice-monitoring  computer on the bridge: 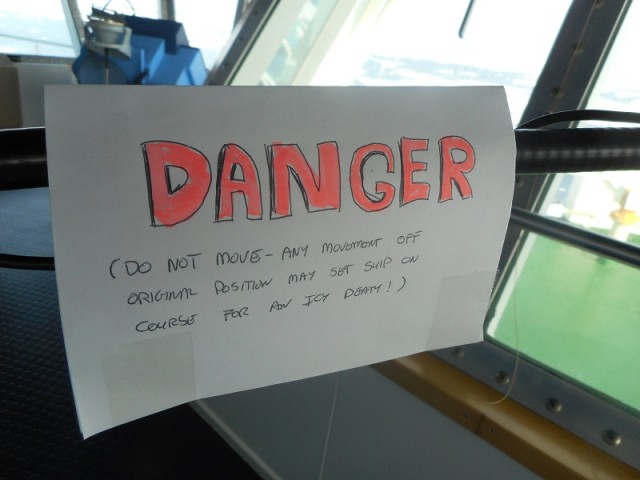 Unfortunately, this warning is on a lighting boom that stretches over a walkway I like to walk down frequently.