It’s been almost exactly two months now since I started with the British Antarctic Survey. In this time, I’ve done a lot of strange training I wouldn’t have anticipated had you asked me two months ago what training we needed for Antarctica. For example, we haven’t yet sat in a freezer for hours on end or learnt how to grill penguin medium-rare.

Our first part part of training was at BAS’s offices in Cambridge. This was mostly lectures and tutorials to learn about the various science and experiments we have out at Halley. Very Powerpoint. This was the minor concern though; most of this time was spent packing – both our personal kit and the experiments we’re taking down with us – as the deadline for shipping was only three weeks after I arrived into the UK. We had a few days learning about all the different types of clouds. This was further busied by being the time I meet lots of new people, discover BAS’s rules and culture and get settled back into the UK. It’s a bit of a blur.

The second part was Conference. This was a particularly interesting time where almost everyone going to Antarctica goes to Girton College, one of the old, historic collages of Cambridge Uni just outside of town. So old and historic, in fact, that it didn’t have drinkable water, wifi or card payment in their bar. But very nice. This was a few days more of Powerpoint, science and more people to meet. I also met my whole wintering team for the first time and quickly started the first of many highly unsubstantiated, vaguely worrying and hilarious rumours that BAS loves so much. We finished with a lively first aid course. In a typical first aid course, you learn how to stabilise someone until someone arguably more professional comes along. In Antarctica that isn’t something you can depend on, but we kind of glossed over that part. We’ll work it out when we come to it. Improvisation is king in Antarctica, and that applies to medicine too. This course also starred the Casualty Union (a group of actors who tour the country to play the roles of the dramatically injured), Entenox (oxygen and laughing gas) sampling and the presentation of our painkiller options in the field (Paracetamol, Ibuprofen, Tremadol and Morphine)…

The Conference was followed immediately by a field course. This was a few days living as if we were in the polar emptiness and for this they chose the location in the UK that BAS feel best mirrors the barrenness, desolation and remoteness of Antarctica. So, of course, Derbyshire. We were in a campsite just South of the Peak District but in fact that didn’t much matter since the only time we left the campsite was to explore the local pub in the evenings. All our field training – including the navigation – was taught on the campsite grounds.

The training here was a mix of things:
* Ropework – abseiling, learning to jumar (which is like abseiling but upwards and therefore much less sensible), crevassed area crossing, crevasse rescue (for when the crossing doesn’t work out so well..)
* Cooking and lighting burners (apparently it’s too cold to cook outside so we discard classic safe campcraft and cook inside). Our stoves and lights seem old enough to be the same ones used by Scott et al and have a tendency to explode flaming petrol everywhere. I’m sure it’ll be OK.
* Navigating in whiteouts – how to walk around a white snowy terrain when the sky is equally white and there is fog. We simulate this by wearing buckets on our heads so we can only see our feet and a compass we’re holding. That makes for an interesting show for curious bystanders.

After the field course, we returned to Cambridge and resumed a more normal 9-5 routine, peppered with other training courses of various kinds. We learnt to be operators of cherry pickers or, as operators of cherry pickers like to call them, MEWPs. This is so we can pick any cherry trees we encounter on the ice shelf safely. Continuing this theme of working on high up stuff despite our perfectly flat destination, we trained to climb up masts. At Halley we have a number of masts that we use to -receive radio 4- elevate our science packages off the surface. One experiment I will be deploying shortly after arrival will need to be mounted at various points on a 32m mast, so we need to climb up, haul up the experiment and attach it. This course was good fun but I imagine climbing the mast in the cold and wind will be less pleasant…

Because Halley is technically an airfield, we have a legal obligation to have a firefighting capability there. Five of us were sent to RAF Duxford to learn how to deal with aircraft fires and rescues over three days. Conveniently, many of the principles when dealing with aircraft also apply to our base – after all, we will be living in long, confined metal and plastic tube filled with fuel and other elaborate substances. This training was exceptionally fun – rushing around in fire engines, wearing all the protective fireman kit and blasting fires with copious amounts of water definitely appealed to my 10 year old self. There is one slight issue with this part of the training – all the firefighting we learnt did involve thousands upon thousands of litres of water and foam. At Halley, due to the energy expense of melting water, we have only a small amount of water available in the base, and none available at our snow runway . Instead of a fire engine with a large water tank and pumping systems, we have a snowmobile sledge with an oversized fire extinguisher. This is just a limitation of where we are, and since we’re just accommodating very small and well-piloted aircraft, it should be fine. But still amusing. And a lot of what we learnt wasn’t about putting out fires but how to safely enter smoky areas to find missing people, which was very eye-opening.

Another perk of the fire course was that it was held in the grounds of RAF Duxford, which is also the home of an Imperial War Museum campus. During the breaks we were free to wander the exhibits which were very interesting. Highlights included a walk through an early Concorde, not seeing a stealth fighter (very impressive), and seeing a Mark X Lancaster, which is of personal importance to me as it was the craft my grandfather flew in the War.

Training has largely come to a close now with no more formal courses to do. From here until departure, it’s just a matter of reading, designing and preparing anything else we might consider useful. On arrival on the ice, we go through another round of in-situ training. 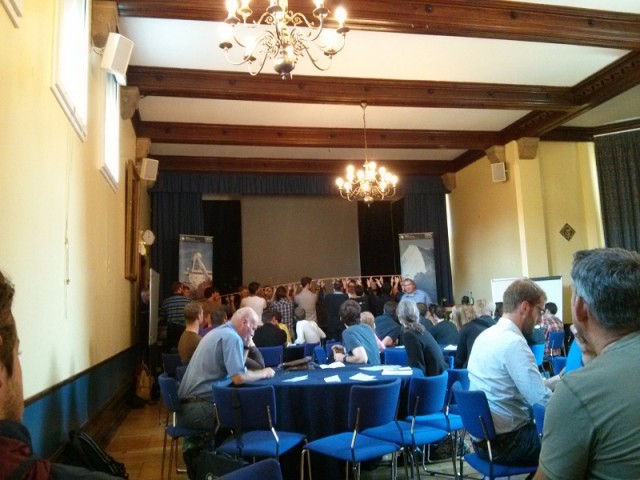 One of the sessions at Girton – in this case a group exercise in putting a rod on the floor. Turns out the participants found this very hard to do… 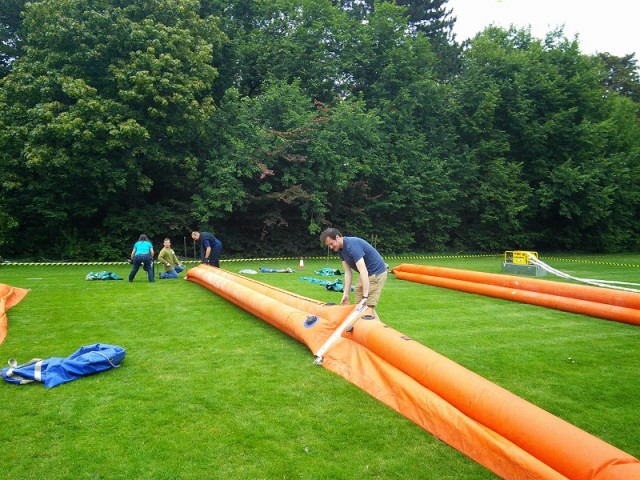 Here, we are being taught the art of oil spill response. Since some of our bases are on the waterside of some very fragile marine areas, we all needs to know how to contain and clear an oil spill should it happen. Since we have no sea near us in Halley, it’s not quite so critical for our team, but nonetheless interesting! 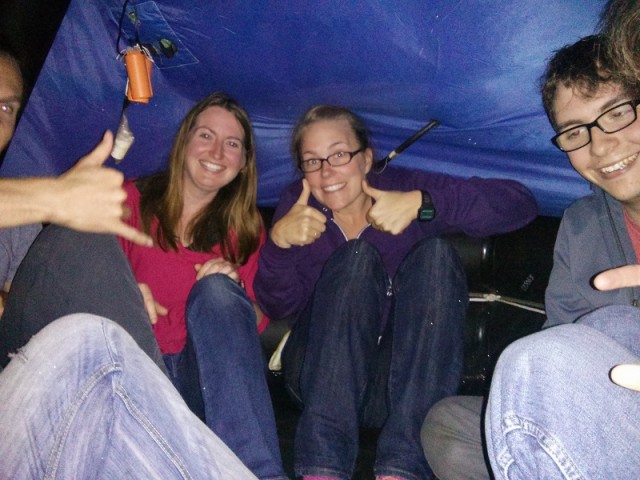 Part of the training involved simulating a ship evacuation at sea. Here, we are all having way too much fun in a liferaft… 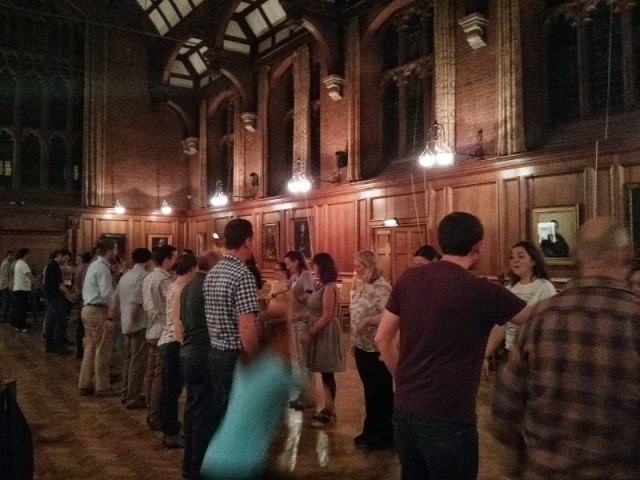 Not all fun and games – one night we all put in some exhausting hours at the Girton Conference Ceilidh! 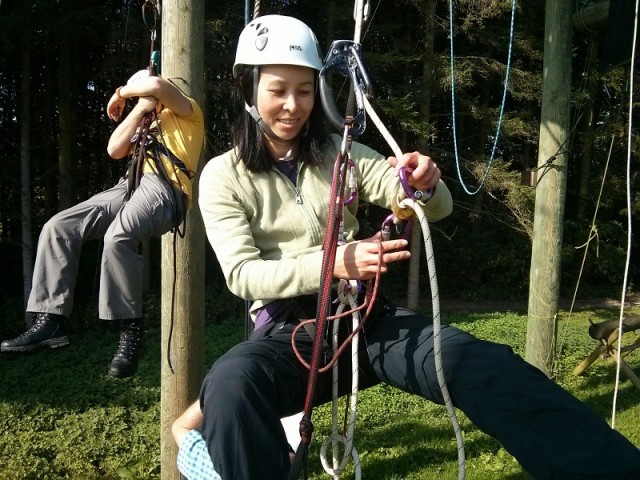 During the ropes course. Here, Hue is trying to work our the correct process to switch from an ascending position (jumarring) to a descending one (abseiling), without letting herself off the rope. A wee bit tricky… 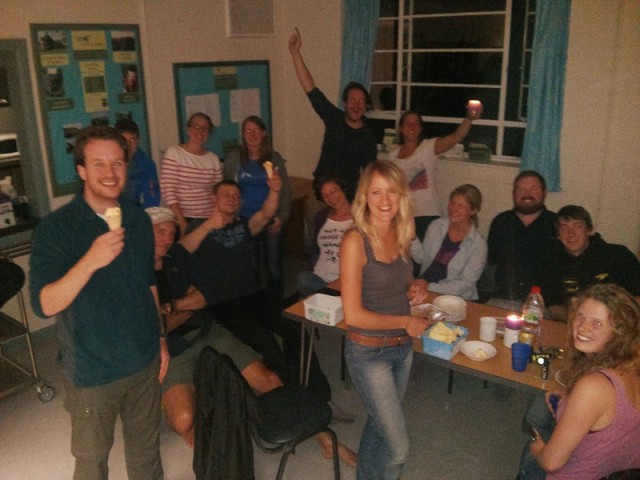 The last day of the field course coincided with my birthday.  Someone picked up on this and at midnight icecream with candles on appeared! Very fun! The people here are a mix of winterers going to bases at Halley, Bird Island and Rothera. 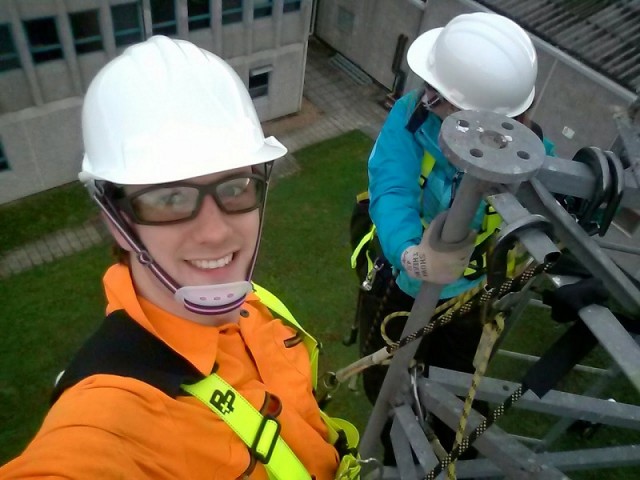 Mast climbing training. We have a mast in Cambridge to practise on. Here: me at 16m. 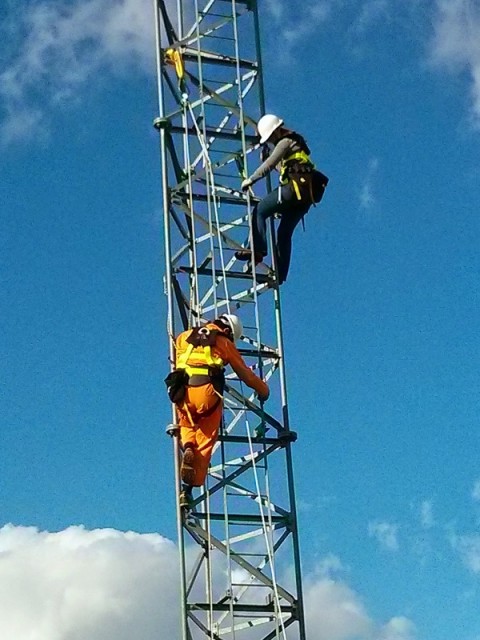 More mast training: in this case, Celine and I are replacing a ladder segment.