So, here am I and 11 others, sitting on the ice shelf, living it up. Apart from satisfying the various extremophilic/civilophobic tendencies of the team, why are we here? It’s not a great place to be. Humans aren’t supposed to be here – something the environment reminds us of frequently enough. Well, there are two purposes. First, we represent the UK on the continent. Second, we’re a scientific station. Today, I’ll outline some of the stuff we do here.

Halley is described as a “data factory”. We collect data but we don’t analyse it – no papers get written here. We send our data back to HQ in Cambridge and academic institutes around the world where much more sensible people can ponder over it right after a pleasant picnic under a tree.

The data we gather is predominantly of the atmosphere and low space environment. This is important for global climatic research – long-term, planet-spanning atmospheric changes are heavily driven by the behaviour of stratosphere. The polar region is both a “clean” environment free of local human or natural effects, and where global atmospheric trends tend to be amplified. It’s also a very underobserved area, with only a few observation stations over the whole continent.

So, what do we do to monitor the sky? First off – the cameras!

We have two cameras looking at the sky. The first is an airglow imager – looking for the faint glow of hydroxyl molecules to determine the temperature of the air 85km up. The second is an infrared camera designed to find and track the movement of high-altitude clouds to determine the motion of air where they are. it does so by looking for gravity waves – undulations in the cloud caused by ripples of air slowly floating past. These cameras, like most of our kit, are housed in “cabooses” – small shipping containers on legs 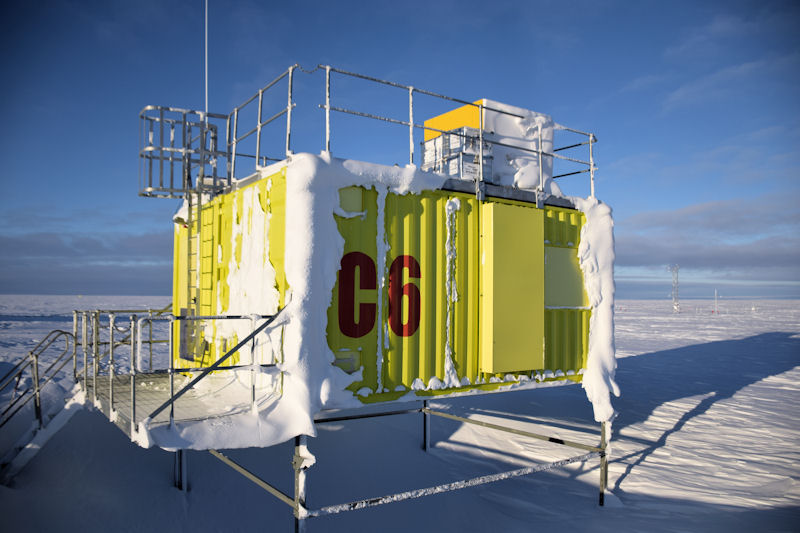 Next up, we have the radars. these are the biggest and most photogenic objects on the base. We have the Medium-Frequency radar, which is made of 12 20m dipole antennae blasting 120kW of power straight up and seeing what comes back. The other is SuperDARN – one of a large network across Antarctica – which beams its power at sideways, with signals travelling up to 3500km. Both radars sees reflections from the charged particles in the ionosphere and, from these reflections, the shape of the ionosphere can be reconstructed. The movement of air in the upper atmosphere can be tracked and the distribution of the sun’s energy can be found. 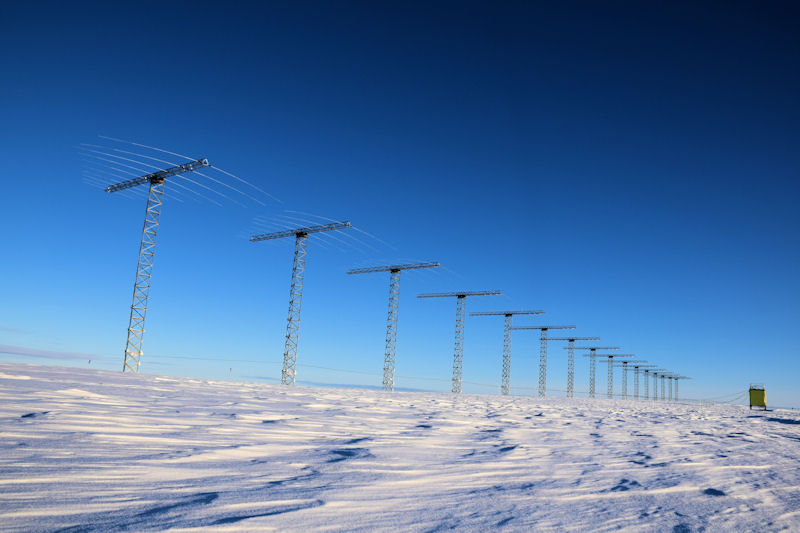 My colleague Dave looks after all of that most of the time. My biggest job here is looking after the Microwave Radiometer. This is a neat piece of kit – it detects ultra-weak emissions of various molecules in high atmosphere by looking at the radio spectra around 230GHz and 250GHz. These molecules emit minuscule amounts of energy, but they do so at very specific frequencies. Using a cryogenic chamber to cool a superconducting detector to under 4 degrees above absolute zero (that’s a nippy -269C), these signals can be found and amplified. By looking at the intensity of these faint signals and their bandwidth, we can determine how much there is and how high it is. We’re looking for ozone, carbon monoxide, peroxide and the particularly elusive nitrous oxide as these guys are particularly important in atmospheric processes.

By the way, the cryogenic chamber may well be the actual coldest place in Antarctica. The Helium compression system that allows us to achieve that temperature makes a loud and steady chunk noise exactly once a second. A few hours working next to this instrument and your heart starts to match the beat… 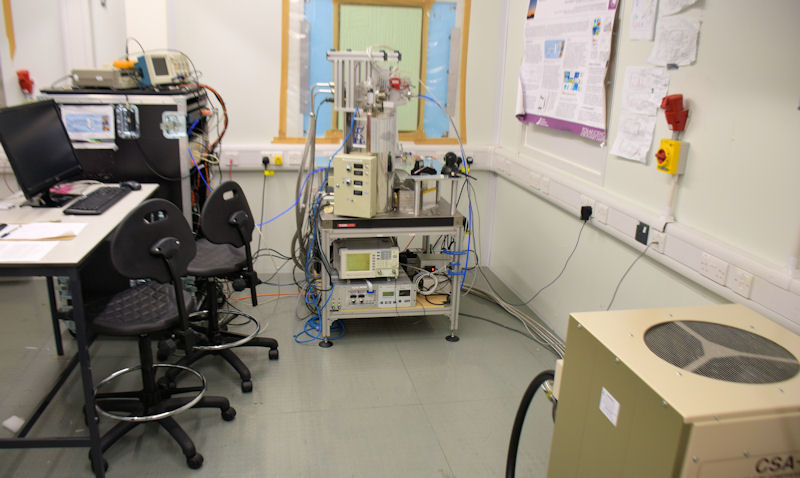 The other major experiments I look after are the ones in the Electromagnetic Quiet Area. These are the opposite of the electromagnetically loud, powerful antennas – these are receivers quietly listening for radiowaves that give us hints in to what the sky is doing. Accordingly, it’s placed way away from the radars to prevent interference. These instruments are so quiet that they can detect the movement of a speaker in a radio, or even someone walking past them. There are several instruments in this area. First up, we have the riometers – simple upwards-facing 30MHz antennas listening to celestial noise, and watching how it is attenuated by atmospheric effects. Then we have the magnetometers – one of which is in a 10m deep tunnel (which is kinda cool to go down!). 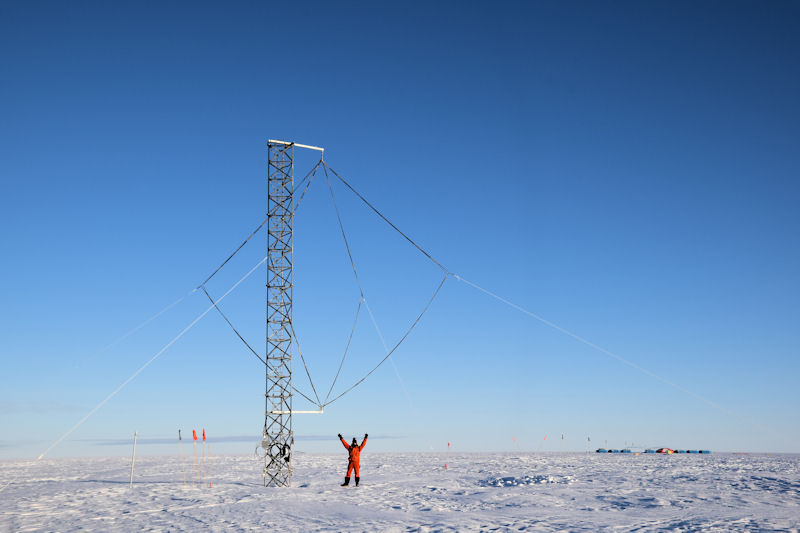 Next we have the VLF tower. This is a 16m tower 1.2km away from the base – this distance to avoid noise from the base – that listens for VLF radio. That’s very low frequency radio – 1kHz to 40kHz – which has the useful property of being able to travel around the planet. We can see radio waves being generated by lighting strikes all over the world. There are loads! We can see the low-frequency transmissions that are made by governments to submarines – this radio being uniquely able go underwater – and we use these signals to work out what’s happening to the ionosphere between us and the transmitters. While we can’t understand the messages, it’s kinda cool seeing them (and unnerving when they suddenly all stop transmitting at once…)

There’s more things as well, but they’re the main things. In the summer, we’ll fly out to field sites all over Antarctica to checkup and maintain autonomous observation stations that we have dotted all over the place – more on that at the time.

Celine, our atmospheric chemistry specialist also does a load of sampling and chemical tests on the air and the snow that falls. There’s a large area – the Clean Air Sector – where no vehicle or other source of pollution can go. In the middle of it is a small laboratory – CASLAB – where ultra-sensitive spectrometers continually see what the air is made of. It’s sampling like this that shows what, for example, the concentration of greenhouse gases carbon dioxide and methane are – sadly, always on the rise even here, thousands of kilometers from the nearest substantial human activity.